Who Needs An Agent?

Who Needs An Agent? by Rebecca Valentine

Many times I am asked the same questions: Will you look at my portfolio and suggest an edit? Will you help me draw up a budget or give me a sample to work from? How can I get a book deal? How do you move into the fine art market? All of these questions and more are covered in my book Who Needs An Agent? Now you are the expert and the master of your own success!

Learn how to become a successful commercial photographer without securing an agent.

As a commercial photographer you can expand your career across advertising, editorial, fine art, syndication and corporate markets. You can win awards, sell your art through galleries and see your images published internationally.

To help you succeed Who Needs An Agent? includes:

• A unique twelve-part Masterclass covering all aspects of commercial photography written by a top London agent.

• Guidance on HOW TO BREAK INTO NEW MARKETS using lateral approaches. 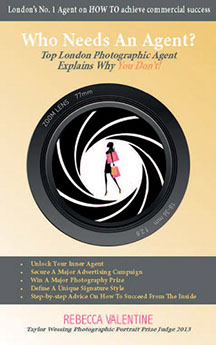 I have worked as a photographic agent for over fifteen years. During that time I have represented numerous photographers who have achieved international award-winning status, secured global advertising campaigns, published their archives as limited edition collectible high-quality hard-bound books, exhibited in major galleries across the globe and appeared on the front covers of the worlds major newspapers, trade and consumer press magazines.

I have had the privilege of working with some of the best international photographers of our age, including master photographers (David Montgomery, Helmut Newton, Brian Aris, Chris Dreja, Elliott Landy, Michael Spencer Jones, Karl Ferris, Paul Spencer and Nadav Kander) exhibiting worldwide.

More recently I negotiated the worldwide usage rights for Paul Spencer's Morrissey Autobiography front cover. This was a mammoth task working with independent publishers in over twelve foreign language territories.

My greatest achievement has been coaching aspiring photographers, who strive to break through barriers to reach the highest ranks of art, advertising, music, fashion, publishing and awards. Some have secured global advertising campaigns, others Gold Awards or recognition within the world of fine art. For me, taking a dynamic view and lateral approach to representation has been the very essence of my own success.

I hope to pass on my wealth of knowledge and experience built over fifteen years, offering techniques  to ensure you achieve your full potential. By stimulating a renewed passion, focus and professionalism the book will open up the wider creative community allowing you to excel in your chosen field.

My hope is that you will become your greatest representative.